This is Not a Uniting for Action Project

This video, created in May, 2017, encapsulates the activist energy that Uniting for Action LLC was born out of in August, 2017.
Important:  Do not share this page because this mockup video contains copyrighted material that permission was not given to use. Jared originally created this draft to share with the copyright holders to secure their cooperation, but then went in a different direction with messaging. This video was never shared in any public ways.

This video, published in August of 2018, was used for a few years to describe what Uniting for Action was created for – to facilitate collective actions at a sufficient scale to create results.
This is still the long-term objective of Uniting for Action.
The 30-second segment cued up here:
“Since our society is primarily driven by economics and politics, we’re bringing organizations together to coordinate our individual and collective actions in ways that effectively leverage our power and influence with the business and government entities that drive our society to create and sustain the solutions we need and demand in order to preserve what the United States of America was created to protect – our unalienable rights to life, liberty, and the pursuit of happiness.”

These diagrams were created in May of 2018 to show how we, as individuals, can work with organizations to help organize us at the scale necessary to leverage our collective power with business and government to effectively influence decisions and actions. 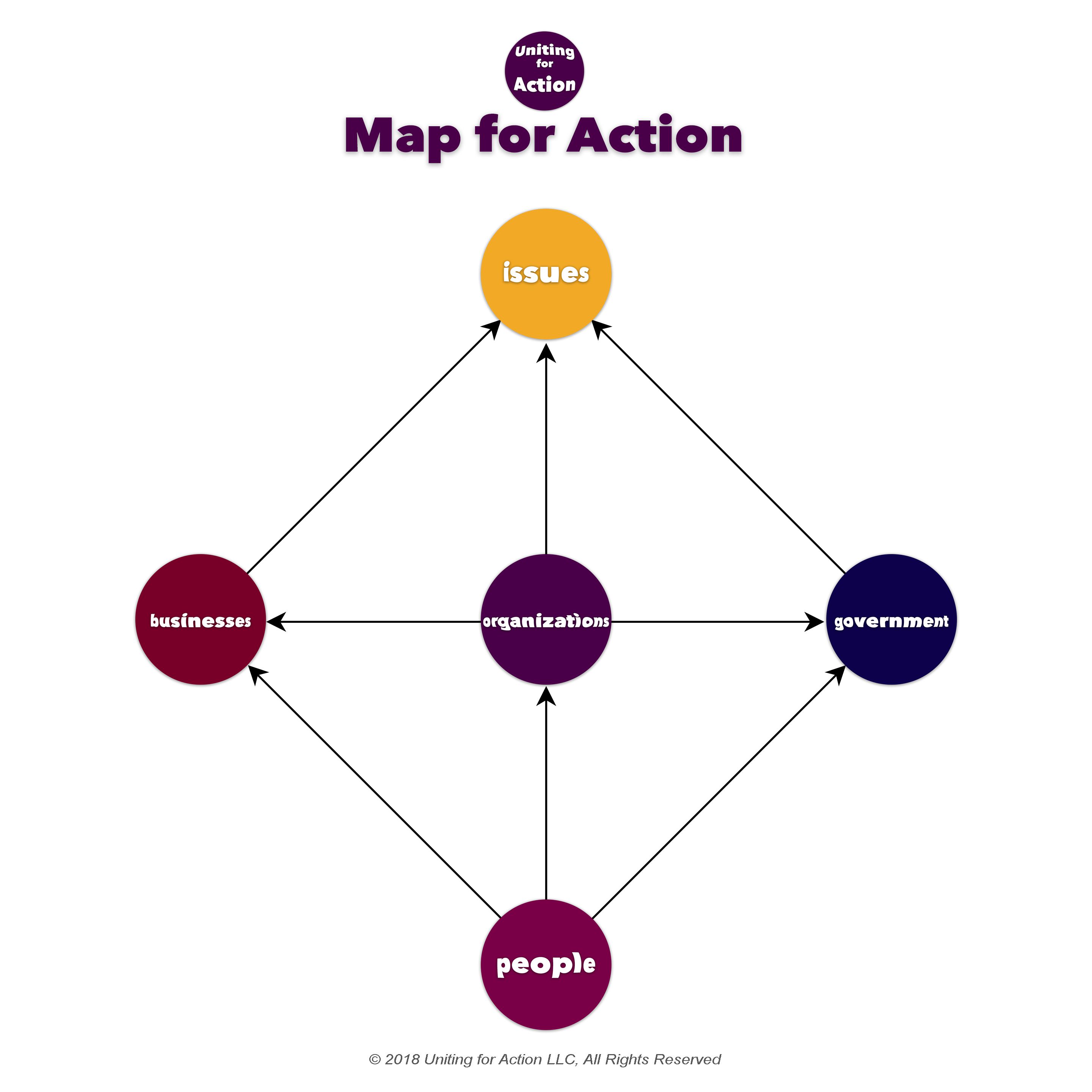 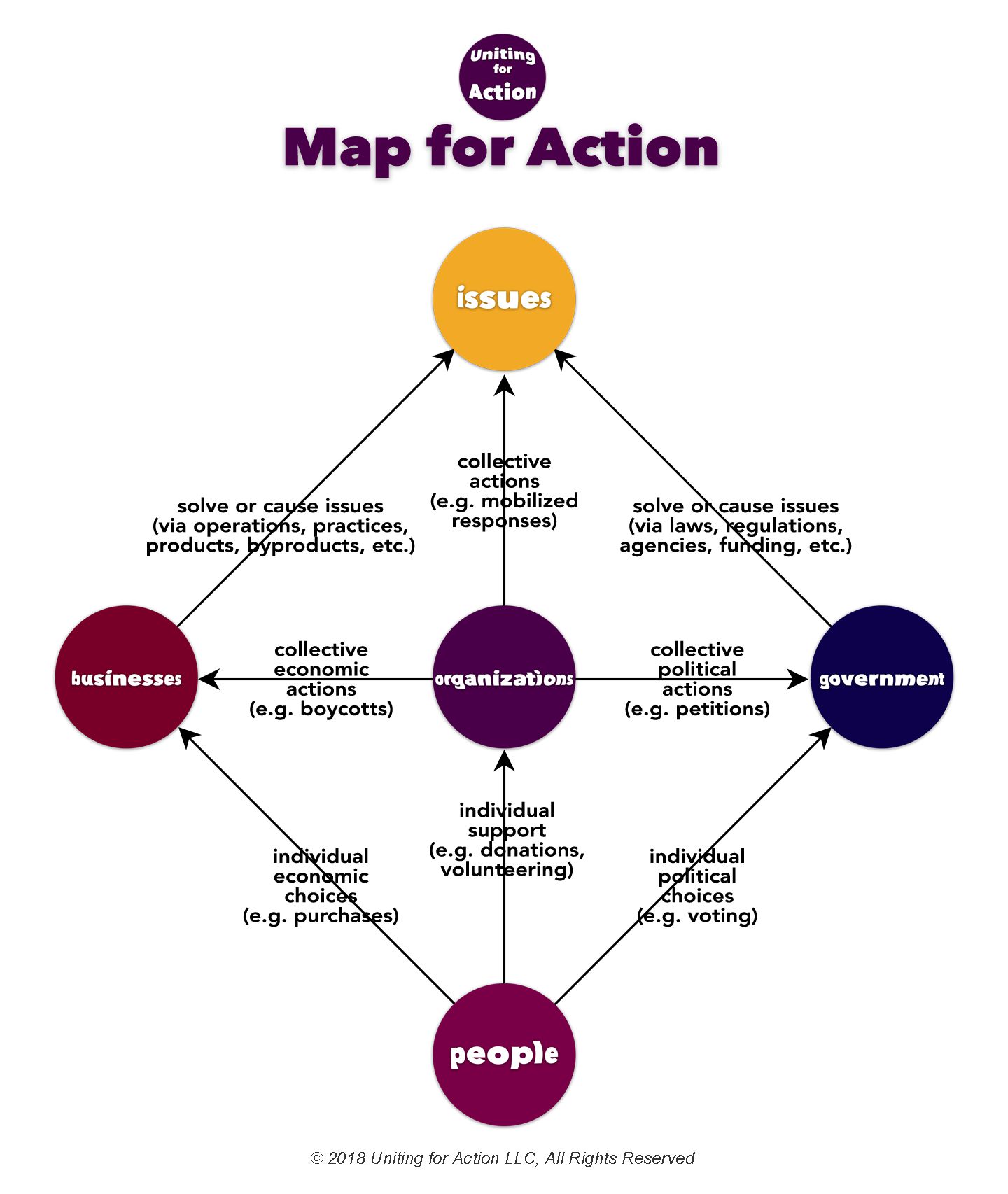 There’s a lot of leverage that can be applied when you can garner a high percentage of agreement, because it doesn’t happen too often – especially on a global scale.
In 2019, I created a multi-dimensional, comprehensive, collective strategy I outlined in this 20-Page Strategic Plan / Playbook to exert popular pressure to “convince” the U.S. Senate bring to the floor the Universal Background Checks Bill that had been passed in the U.S. House of Representatives.
Many of the elements of this campaign can be used for other campaigns. I tried to be general. I’m also going to add a lot of new techniques and strategies. It gives you an idea of what we have to work with, and that I’ve done work in this area, and what my work in this area looks like.
Also, this begins the conversation for others who have anything to contribute to do so.
20-Page Strategic Plan / Playbook

Watch the first couple of minutes of this video to see the speed of response when big corporations are put on blast.
It happened with American corporations over the course of a couple of weeks, too.

Leverage to Be Brought to Bear

The foundation of the work I’m imagining doing is bringing together non-profit organizations, influencers, issue experts, etc., using the Collective Solutions Framework to lead a global effort leveraging collective economic, and public relations power, to target individual companies on the Yale University List of Shame with a range of collective actions that will create pressure on them way beyond what they’ve experienced to this point.
Just like the corporations that were previously

Just like the corporations that were previous holdouts and moved, we can bring a lot of pressure to bear to get those which are still holdouts to move, which shows the world how to create results.
In a way, this is essentially teaching society how to create populist economic warfare, using social media and traditional media, that we all can wage from the comfort of our phones or computers, and collectively create results anywhere we can mobilize in sufficient numbers to move the needle.
When we use our channels to allow people, companies, and organizations to find each other in mass numbers, along with the tools for them to take collective actions together, we’re providing all that’s necessary to leverage our collective power to create results.

I’m using this situation as a model to teach the world how we leverage our collective economic power so we can begin to align our global actions with all our values, including around climate, deforestation, plastics, social justice, domestic abuse, etc.
Uniting for Action provides the Collective Solutions Framework as a framework to allow us to find each other and take collective strategic actions together at a scale that creates the intended results.